Hey everyone, over the weekend of 11/1, 2019,  I had the opportunity to go down to Los Angeles and join some of my fellow Gonzaga TFXC alumni to cheer on this year’s team at the West Coast Conference Championships.  It was a lot of fun.  GU’s coach Pat Tyson (he was Steve Prefontaine’s college roommate), is building a powerhouse of a program at Gonzaga.

The GU men and women did exceptionally well.  The men finished 3rd behind BYU and Portland.  BYU is currently ranked 2nd in the nation, and Portland is close behind at 12th.  The Gonzaga men’s team finished just 12 points behind Portland.  No team in the history of GUXC has been this good.  The women made major improvements from last year and finished 4th overall.  It is a testament to the program and how much it has grown.  In the late 80’s I ran at Gonzaga.  After I graduated, I coached there for 4 years.  Little did I know what was in store for me on this trip to watch the championships.  Everyone was in on what was about to happen……except me.  3 of my former athletes that I coached hatched a plan at last year’s WCC XC Championships  in Provo Utah.   I was not able to make that trip.  When this year’s meet was over, the team and all of the alumni gathered around and my former athletes told the story.  Mike Myette and Rob Boulds talked about how last year at this time, they had come up with a plan to create a new scholarship endowment.  Mike would match every donation dollar for dollar until they had raised the minimum amount to create the scholarship ($50,000).  Rob would be the vocal leader who would rally the XC Alumni throughout the year to raise the funds.  Another former runner Pat Hill was in on this along with my fellow teammate Eric Thompson.  Other athletes, like Robert Walgren, who weren’t from my era, played pivotal roles as well.  Throughout the year, they worked and poked and prodded to raise the funds and just before this year’s championships, they had reached their goal.  Then….they asked me to step forward.

What!!!??? They presented the scholarship in my name.   I was shocked, honored and humbled all at the same time.  These guys who ran for me soooo many years ago were kind enough to work to create a scholarship in my  name???? Going forward each year, an athlete will receive a $2500 scholarship (basically the interest on the initial amount raised) perpetually.  All of the alumni who were there knew about this.  I was the only one in the dark.  I am still a bit shocked.  What an amazingly nice gesture.

So how does this fit into Hiprunner?  Well, I like to run.  I am a Hip Runner.  I created this community of Hip Runners as a way to give encouragement and support to those who faced hip replacements and wanted to continue to run.    Gonzaga TFXC is a lot like the Hip Runners.  They don’t even have a track to train on, yet they were ranked 29th in the nation this year.  Over Achievers.  Just like Hip Runners.  This scholarship is a “legacy” scholarship. The legacy scholarship should include the legacy of the Hip Runners as well.  When it comes to running and its affect on me through my college years, I am not ashamed to ask.  If you feel so inclined I would love to see this scholarship grow to a full ride.    On a side note, if you’d like to help us build a track, contact me directly. 🙂

There is no obligation and I don’t know if I will have any way of knowing if you donated, but it would sure be nice to see this thing grow……

Here are the steps to donate:

Step 2: Select the ‘Other or Multiple” option….. 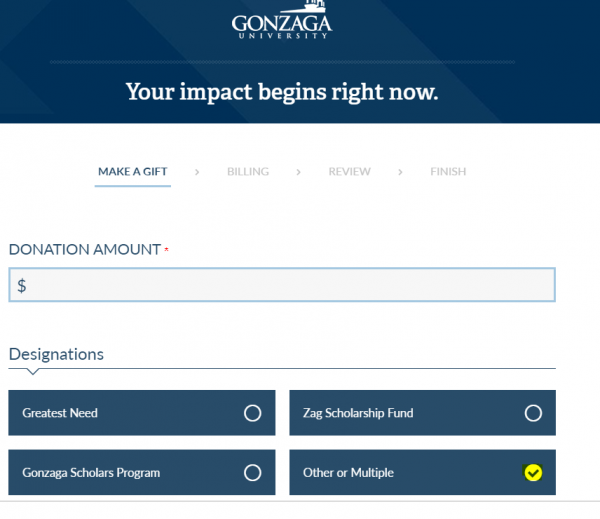 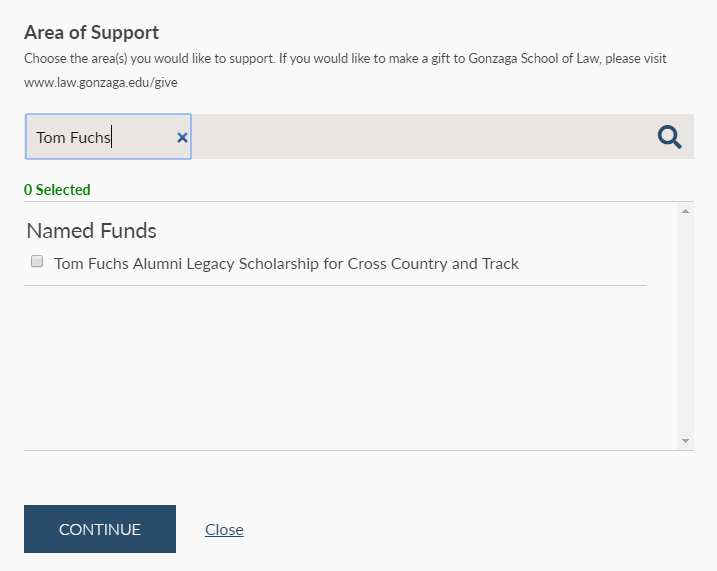 That’s it.  Thanks for reading.

Home › Forums › Want to be part of a legacy?