Earlier this year, my SDP Teammate Mike, told me about his friend Jim  who had the Rim-to-Rim Grand Canyon Run on his bucket list.  Jim’s wife knew that Mike had run the Grand Canyon the previous year and asked if he could arrange to do it again as a surprise present to Jim.  When Mike started describing Jim to me, I realized who he was.  Jim played basketball at Gonzaga University  back when I was going to school.  I watched him play, and his wife Dana ran on the track team.  I knew them both.  I was in.  Mike also corralled 2 other SDP teammates Fitz and Andy.  Andy had run rim-to-rim-to-rim last year (that means he ran across the canyon and then back again – He is a crazy, super talented mountain runner).  Like me, Fitz was going to be running it for the first time ever.  On Friday Morning, October 14th, we flew out of Spokane and into Las Vegas.  From there, we rented a van and drove east for 4 hours towards the North Rim of the Grand Canyon.  On Friday night, we stayed at a quaint campground/motel called Jacob Lake Inn.  There wasn’t much to the place, and for the cabin that Fitz, Andy and I stayed in, it looked like plumbing had been added long after the cabins were built.  But the little camp served its purpose and in the morning, we drove the final 40(ish) miles to the North Kaibab trailhead at the north rim.  Mike’s wife Mary, and Jim’s wife Dana would then drive the van around the canyon and meet us at Grand Canyon Village at the Bright Angel trailhead.  (A 4 hour drive).  The picture above is one that we took shortly after we started descending into the canyon from the North Rim. 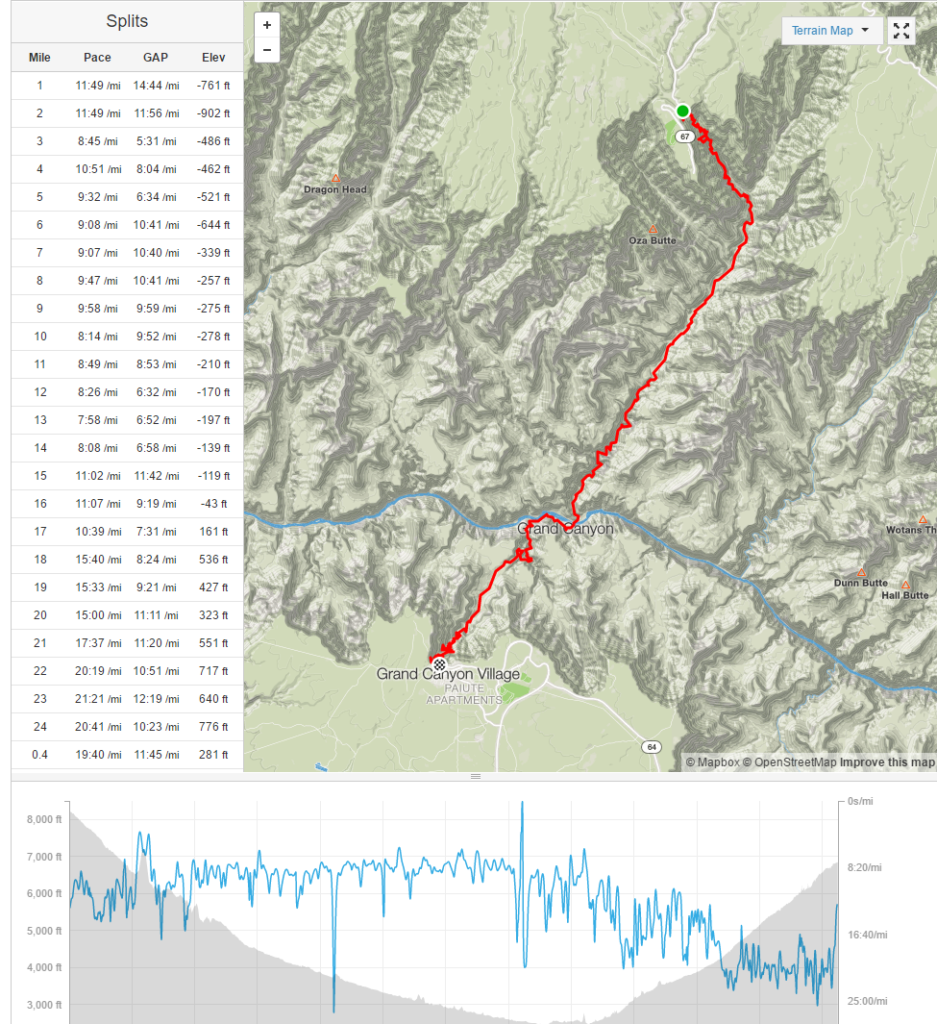 This pic from strava pretty much describes the run.  Steep downhill first, followed by easy downhill for several miles, then steep uphill.  Miles 6 to 14 were our fastest.  We had a fairly easy descent through the canyon to Phantom Ranch, which was located at the base of the south rim.

There were plenty of moments to enjoy the scenery and since we weren’t in a hurry, we did just that….


At the bottom of the canyon we followed the Bright Angel Creek through the gorge.  The area was surprisingly lush with greenery.

At Phantom Ranch, at the base of the South Rim, we took a break to grab a beer and mail out post cards to family.  The post cards were packed out by Mule.

The ascent from Phantom Ranch was nothing to write home about.  By this time, my calves were aching and my left achilles was tightening up.  Andy completed the 24.5 mile run first, followed by Fitz and then me sometime later.  Mike and Jim followed about 20 minutes after me.

As far as the hip goes.  I had zero issues.  There was no pain in the hip.  The left achilles (THR side) was super tight and both calves were screaming at me.  My calves are now fully recovered.  But after a nice tempo run yesterday, my left achilles is barking back at me again.  Time to sit on the Zero Runner for a few days until I can hit the trails again.