I’m very happy to have stumbled upon this site! I am having THR on April 14th, and the prospect of it is nervewracking, to say the least.  Efforts to avoid this have been going on for over three years.  One year ago I had stem cell therapy, which clearly did not work.  It was pretty invasive and painful, and the doctor followed up at month one and then never again, despite my calling the office 4 times.  I began running in 2006 at 40 because my son was a cross country runner and it looked fun.  Flash forward to today, a single half-marathon under my belt and lots of 5k and 10ks, with marathon hopes dashed (or so i thought?).  I am the local high school cross country and distance track coach (the older son is now a junior in college and the younger is a junior at the high school, a pretty decent pole vaulter with a recently severed ACL).  The past 7 months or so, once I began adding running mileage to my weekly workouts, have become more and more painful.  I have run about 5 times since Christmas, most recently a dismal 1.7 slow miles with my 4×8 relay team on a Central Park practice run before Indoor Nationals.  I skipped this past weekend’s 10k–it’s hard to walk at all at this point.  So the doldrums had set in when i did a google search about running after THR, which the docs have all said is a foolish idea, but I found you!  I will continue to read and follow you all as I rehab, and will hopefully post my first run as soon as possible! For now, thank you for being here! It’s a huge comfort! 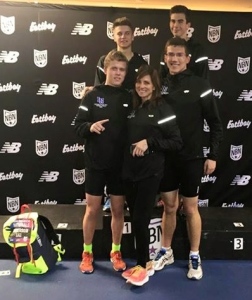