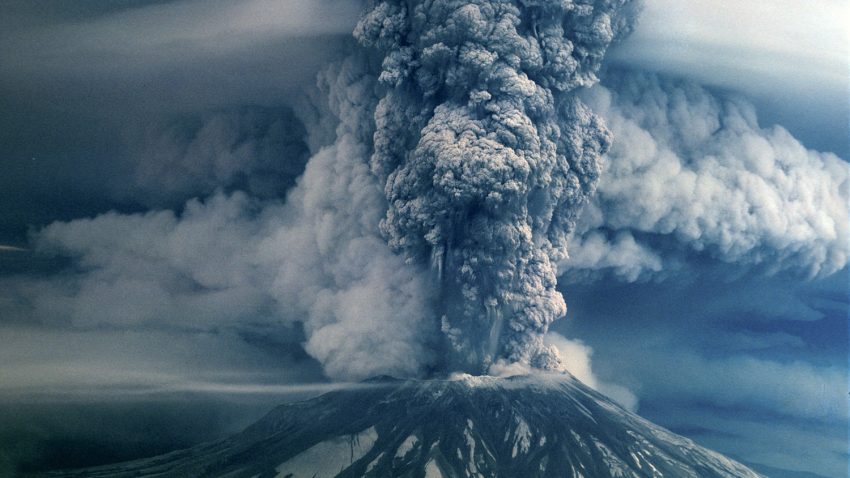 When I received my hip replacement in 2012, I felt that I should stick to shorter runs going forward.  Typically I stuck to half marathons and maybe a few 25K’s.  Ten years later, the mystique of this mountain and a challenge from a friend, inspired me to run my first ultra around Mount St. Helens.  Dubbed, ‘The Bigfoot 40’, the run around this volcano did not disappoint.  I grew up in central Washington State when  Mount St. Helens erupted.  Within a few hours after the May 18th 1980 eruption, our small little town was enveloped in darkness with ash raining down.  The darkness would last for more than 24 hours.  It was crazy.  So to get a chance to experience closely where it all happened, I was super excited.

It also didn’t hurt reading all about fellow HipRunner Dave Whiteside’s ultra running exploits.  He is killing it in the ultra distance scene and the hip is still going strong.  Armed with that motivation, I started training vigorously as soon as I was able.  I spent last year down for the count with multiple consecutive injuries.  First their was the hammy strain right at the sit bone.  It made running an extreme pain in the butt (literally).  Then, last fall while coaching my elementary XC team, I strained my Achilles tendon  which set me back until late February.  When I was finally able to train in earnest, I was way behind the rest my running group who were also training for this event.

In a moment of weakness and maybe after a few too many beers, my buddy Jack challenged me to finish the race in under 16 hours.    I told him, “If i finish in under 16 hours, you need to get me a ‘HipRunner’ belt buckle.  Jack agreed.

So last week we loaded into an RV.  We chose not to camp because #1 We’re old, and #2 Hobos camp.  We left for the mountain a day early to ensure that we would find a good spot in the parking lot close to the starting line.  Jack drove ahead of us because he was hosting an aid station for the 200 miler on the same weekend.  Keith, Mike and I would follow in the RV.   Mike agreed to drive the RV….being a Montana boy, he was accustomed to handling big rigs.  I would fill in if he needed a rest – because I drove pea combine for a summer in central Washington.  My driving talents were never needed as Mike had the trip handled.

Here’s the crew at the start line.  Freya would finish 2nd overall, her husband Phil would finish 4th.  Ethan, Chris and Justin ran the 20.  Herman and Keith made the older guys proud by finishing in just over 10 hours.  Mike and I would saunter in in our own sweet time.

Running through the blast zone was surreal. Knowing that 42 years ago, this same area was alive with trees, birds and wild life, I felt privileged to be able to experience the mountain in person. I am not sure if this link will work, but it shows a time-lapse of what happened on the mountain, in the very area where this picture was taken.

When the Mount St. Helens erupted, the Toutle river raged out of control carrying the devastation of the blast…..trees, rocks, mud…..to the communities below the mountain lying in its path. 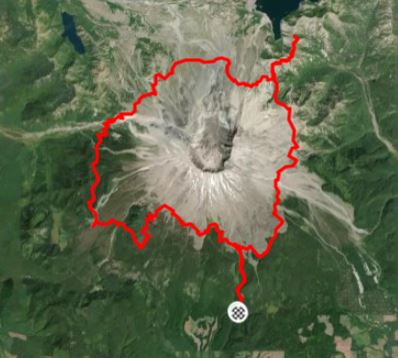 Here is the Strava route.  We started at the X and circumnavigated the mountain in a clockwise direction.  There were just so many different features to this race, boulder fields, rope climbs, the blast zone, more boulder fields……it was enough to make you almost forget you were running 41 miles.

Mike and I took our own sweet time.  We talked about who would finish first but agreed to finish side by side.  In the results, I beat him by .04 seconds.  Jack and the crew were waiting with cold margaritas in hand.  It’s funny, I don’t think I have ever tasted a better margarita.

All in all, it was an amazing experience.  I put in enough training to finish this adventure run and enjoy the evening festivities afterwards.  OH! And the hip?  I didn’t notice it.  Not one bit!  I was more concerned about my Achilles.  10 years later, this hip is ready for some more!