I hope you’re all surviving this crisis that COVID-19 has created.  If there has ever been a need to be able to get out and run, it is now.    It’s been over 8 years since my hip replacement and it is time’s like this that I am thankful that I am still able to get out and run.  One of my annual events that I help to coordinate and take part in is Spokane’s own Lilac Bloomsday race.  For Spokane, it is like the formal introduction of spring to the community.  Everybody, walker and runners alike, gathers together on the first Sunday of may, to run the 12k (7.46 Mile) Bloomsday course and welcome in Spring as a community.  The race hosts around 40,000 people each year…….except this year.  This year the streets were silent and the race was postponed.  We are hoping to host it later in the year (September 20th to be exact).

While the race didn’t happen, some Bloomsday diehards decided to run on raceday anyway.   These diehards included me and a bunch of the guys from my training group (The Spokane Distance Project).  We had all been training through the winter months to run a 50K race on the west side of the state (The Chuckanut 50K trail race in Bellingham, WA).  It would have been my first endeavor into racing a distance longer than a marathon.  When we learned that that race was cancelled due to Coronavirus, we traded out our long slow trail runs for some more up-tempo shorter workouts to prepare for Bloomsday.  We assumed/hoped that Bloomsday would take place.   When we learned that Bloomsday was postponed, we decided to run the course anyways on the day of the planned race.  We chose to go out earlier than the official race start time to avoid any crowds that might have had the same idea. 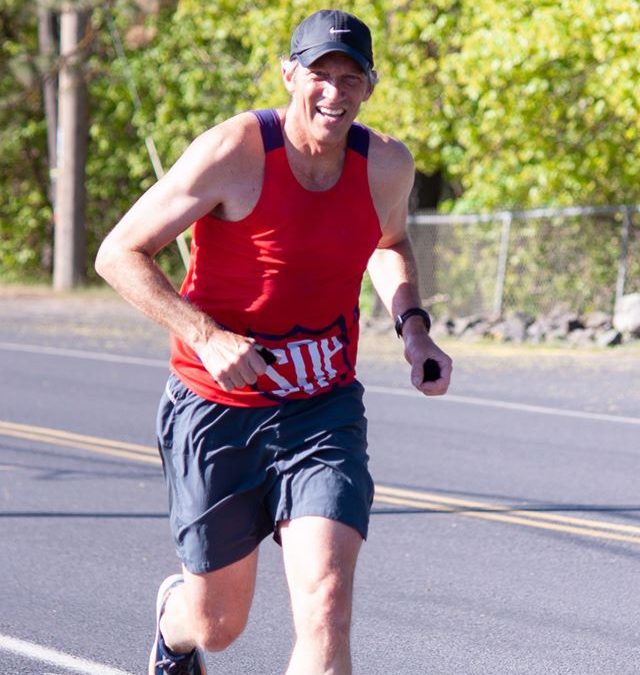 It was a blast.  My training paid off and I finally was able to put in a race with race splits that averaged under 7 minutes for the entire length of the course.  I hadn’t done that since before my partial knee replacement in February 2018.    My official (Garmin) time was 51.02.  I managed to hold a pace of  6:50’s over the entire  length of  the  course. 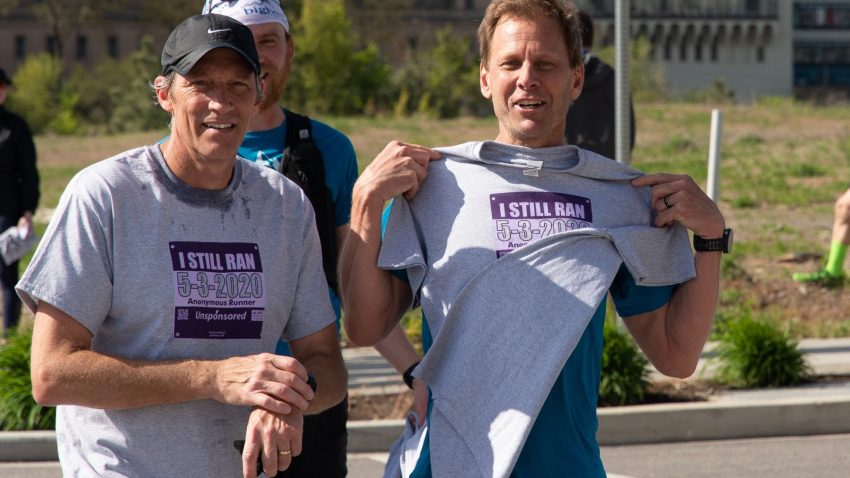 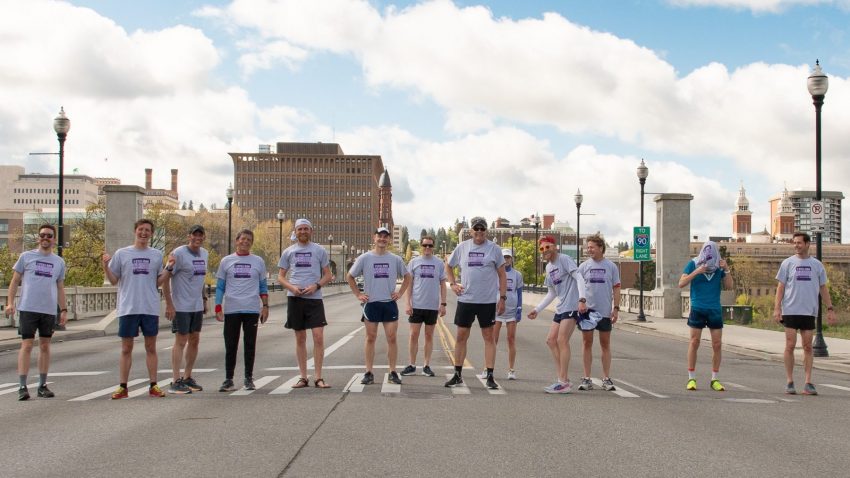 We even commandeered the street (where the finish line would have been) to take a group finisher pic.  The experience was surreal……and much needed.  After all of the miles and trials we had put in, it was nice to finally get out and run a race.

I wasn’t finished though.  Hip Runner Christoper Kelsall with  Athletics Illustrated hosted a virtual global 1-hour race and the Hip Runners had a team!  Thanks to Hip Runners Jacek Chowaniec(POL),  Dave Whiteside(FL), Bryan Kohut(MI), Keith McCahon (NI), Chris Kelsall himself (CN), Peter Meads (UK), Sheri Sweigart (NC) and Carolyn Rosner (CA), the Hip Runners held an early lead and represented the entire group!  Jacek was the fastest of our group covering 8.9 miles in one hour and Carolyn Rosner the first female in the Total Elevation gain category.  This was the FIRST event that we as HipRunners were able to do together.

I started developing tightness in my hamstrings shortly after all of this racing.  I nursed it along by slowing down my daily runs and not pushing the pace during the effort part of my weekly workouts with the Spokane Distance Project.  Little tweaks during my running told me that it wasn’t getting better…..only worse.  A week ago, I was out running an easy trail run with some of the guys from the team.  Saturday runs with the group are always easy and slow, so I figured my hammy could take it.  As we were slowly plodding down the trail, my foot caught a rock and I stumbled.     This little trip sent me flying off the downhill side of the trail.  I braced my whole body for the impact, and it was this “brace” that did my hammy in.  Apparently I hit the ground and rolled and stopped just short of a tree.  None of that registered to me.  What DID register to me is that when I braced, I felt the hammy brace also, and that is all it took for the hammy to be done.  The pain was considerable and I could not complete the run with the guys.  I hobbled  back  to the  start. 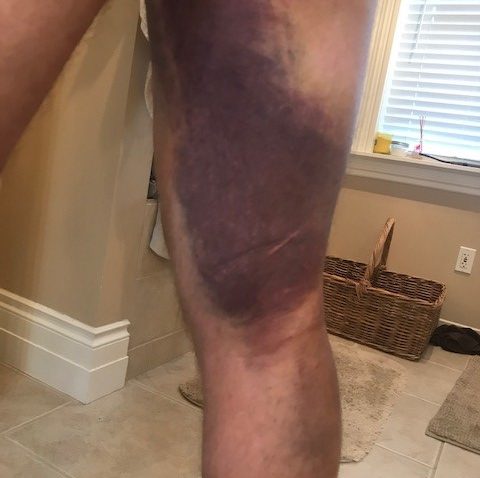 This isn’t my first rodeo with hammy strains.  For me, my thigh tends to swell up with no signs of bruising, then ……….. this happens.  I have been following the rules of R-I-C-E (Rest-Ice-Compression-Elevation) while I wait for the bruising to fade.  I won’t be running for a while, but I HAVE been able to jump on my Zero Runner.  While I am down, I am  keeping my sanity and I have the Zero Runner to thank for that.    There is no lesson to be learned from this other than the fact that it is just another obstacle.  The Hiprunner mantra says “You don’t stop playing because you grow old, you grow old because you stop playing”.  So for all of you Hip Runners who are struggling out there,  keep your chin up and keep your eye on the prize.  Stay optimistic and eventually, you will get out there again…..just like I plan to.