Another overall win this weekend at the first of the Summer Slam series in Florida during the heat of the summer. I’ve been training really hard for the last 10 weeks after finally getting over a little niggle that I had before my 100 miler in January which I carried through to the Antelope Canyon race in Arizona in March. I had wanted to run a couple of other races before this, but decided to back off and fully recover for the series. These were the first ultras I did starting back in 2015, and running and winning this race in Orlando in July 2016. These 3 races hold a special place in my heart, having exposed me to something I never imagined and so glad to have found these and the wonderful experiences I’ve had.

For the last 10 weeks I’ve picked up my training a little bit, not completely following MAF, allowing my HR to be about 10-15 beats higher on my easier runs. I also upped my short runs from 4 miles to 6 miles and incorporated a bridge in them when possible. For my long runs I’ve been training on my local bridge doing anywhere from 24 – 36 bridge repeats each weekend in the heat. My feeling was that if I train on the bridge, running the flats, of which these 3 races are, it will feel easier and I will be stronger. This race started at 8:40am so I’ve also been starting most of my training runs at 8 rather than getting up early like all the crazies and starting at 6. The first couple I did trying to keep my heart rate within a zone, allowing it to go to 140 up the bridge and trying to bring it down to 120 down. Of course as the temperature increased into the run so did my heart rate, but I didn’t push it any harder. The bridge if 0.75 miles and each climb has an elevation gain of about 70 feet. I try to do the first 12 climbs, 9 miles, fasted, without any water breaks or nutrition and then fueling up every 3 miles or so after that. As I progressed I just ran by feel without looking at my watch, and after a few weeks each bridge climb within the run started to get a little faster, and each week my average pace was a little quicker. The last couple of weeks I pushed harder for the last 5 miles to get some turnover in my legs and my heart rate up to prepare for the race.

There’s some good competition at this race and I’ve been watching their races and training runs on Strava, depending who was turning up for the race I knew I could place anywhere from 1st to 8th. I wasn’t sure where my race pace was so planned on going out around an 8:45 pace with a target time of around 5 hours 15 minutes, which I thought may still be good enough to win, and something that was still a stretch for me. As the race started I was near the front but not pushing the pace, then Michael Stork, who just came second overall in a 50K at Niagara Falls and recently ran Big Sur Marathon in 2:54, and Jason Larkin, another local runner running long in the low 7’s, passed me and set an aggressive pace just below 8 minutes. I fell back a few yards as I didn’t want to go anywhere near this fast and was hoping they would slow a little but they didn’t. So I kept my distance off them but kept their pace as I didn’t want to let them go to far ahead. It’s odd, on the 2 hour drive to Orlando with Jiri from our local running group, I was talking about going slow, letting the front runners go and hopefully later on in the race I would hopefully catch them as the heat slows everyone down. I was certain I wouldn’t be able to maintain this pace but threw my race plans out of the window and kept up with them, holding just far enough back that I hoped they wouldn’t notice me. My hope was that they would slow down and I would hold on until loop 6 or 7 or so, then I would look to catch them and see what happened.

The race is around a lake, about 2.45 miles long and you do 13 laps, so rather than a 50K it ends up around 52K, 32.4 miles. The weather was kind for us, the skies remained overcast, no rain, and not an intense heat. It did warm up about 3 hours into the race and the humidity rose but still comfortable compared to what a summer day in Florida can be like. Actually I was hoping for a sunny hot intense day as it would level the playing field and give me a chance against the younger runners as I train in the heat of the day more than most people do. Leading up to the race, each day of the July 4th week I ran 6 to 7 miles at the hottest part of the day to get ready for this. So although the temperature was lower than I had trained for, it was easier to run at this fast pace and I felt okay. I had drank some water before the race started and decided to just start fueling every 2 laps, hoping that keeping my breaks to a minimum I would be able to keep contact with the leaders. The first stop I ran to my cooler, grabber a hand held that was full of Tailwind and headed out, with Michael and Jason still just in front of me.

During that 3rd loop the pace eased a little, starting at 8:15 and then slowing to 8:30 as I closed the gap on the 2 of them. I really didn’t want to pass them but my legs just kept turning and by the time we came to the end of the 3rd loop I was now only 5 yards behind them. Jason pulled off and went to the bathroom and Michael ran through as I did. Shortly afterwards we were running side by side talking about the Big Sur Marathon, Comrades in South Africa and the Tour De France. We stayed together for the next 2 laps, both coming in to get some nutrition and straight back out. During lap 5 I felt Michael drop off a couple of yards behind me and I still felt good, so I decided to pick up the pace a little and try to put a few yards between us. It was a lot earlier than I wanted to push but this was my opportunity and I took it running the next 2 loops at an 8:15 pace. That was the last I saw Michael until I saw him at the race start sitting out having called it a day, he had talked that after the Keys 50K he had lost his appetite a little and was struggling to enjoy the runs and push through the hurt that we all feel in the races. I wasn’t sure where Jason was and expected that he may show up at any time, Jeff Iosa was also a fast runner having done very well recently at the Swat, Sweat and Swear 50K, but as he is running a 100 miler in a couple of weeks I had dismissed him a little. The race allows runners to run in either direction and there was a young woman running the opposite direction that looked strong and I wasn’t sure where she was in relation to me. So I was able to keep my focus and push on, even though I could feel my legs tightening up a little.

I decided to refuel at the end of each lap now, grab a pickle and a salt cap to try to stave off the cramping, drank some water, poured some over my head and got a cloth to wipe my arms head down with some cold water. I felt that I could afford to lose a minute or more each loop and that it would be time well spent. I’ve had a history of cramping pretty bad in races and didn’t want that to happen today. Each time headed out again I felt refreshed and was able to pick up the pace a little. During the race I had 3 sports gels (Sports in Science), an energy bar, a bottle of Gatorade, a banana, Granola bar and 4 dill pickles with some juice. This is a lot more than when I train, and more carbohydrates than I have in an entire week as I follow a keto/carnivore lifestyle. I feel this, along with MAF, has helped me recover from my last 1 year injury just over 2 years ago, keeping my inflammation down and minimizing pain in my hip area. I generally do no speed training as this aggravates my hip and then sets my training back. Unfortunately this hits your confidence and I really didn’t know what I could do.

As I set out on my last lap I saw Jason just in front of me and I passed him, I was feeling great and knew I could push a little harder as I didn’t think I was going to cramp and if I did I could slow down on this last lap. At that time I still thought Jason was in second place and I had the race in the bag. The girl I mentioned, Severine, I had seen sitting at the starting area so I knew I was ahead of her, later I learned that this was her first ultra and she was looking really strong. Watch out she’s going to get stronger and will be pushing us for sure.

I passed Rafael Melendez, the race director for the day as Susan Anger couldn’t make it. He was getting a few laps in anti-clockwise taking pictures of the runners and heading back to the start line awaiting my arrival. I was enjoying the race but at the same time glad it was almost over, these races are hard and take a lot out of you and you start to question why you put yourself through this. But then you think about all the training you put in, the friends you get to see, and the competition it brings out in everyone and it helps you push through the lows.

I crossed the line in 4 hours, 45 minutes and 13 seconds, a lot quicker than I imagined and actually 25 minutes faster than when I won the race 3 years ago. Yes it was cooler and overcast, but I also believe Keto and MAF have helped my training and recovery and my race day performance. I almost forgot to mention my hip, it felt great and didn’t give me any issues. I had worked hard for this and now it’s time to look forward 4 weeks to the next race, the 6 hour Durrty Beer Run in Saint Petersburg with the Pinellas Trail Challenge 3 weeks after that. The competition will get stronger and it will be hotter for sure, but I look forward to see what I can accomplish. Thanks to everyone wishing me well during my loops, your encouragement helps me push hard and resist the temptation to slow down or walk, it means a lot to me. Jeff finished second, just over 15 minutes behind me, a lot closer than what I was aware of so I’m glad I continued to maintain my pace as best as I could, with Jason third. It was great to enjoy a few beers after the race with everyone before the long drive home and enjoying a nice steak for dinner.

Home › Forums › First of the Summer Slam series and an Overall Win! 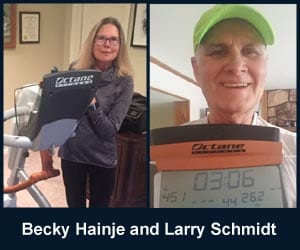