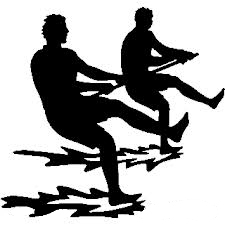 During this last week, I received reports from my Hip Brothers Jeremy and Ira.

Being only 10 months out from his hip replacement did not prevent Jeremy from parttaking in his annual tradition of barefoot waterskiing with his buddies.  Here is what Jeremy had to say…..

So I know that you have not missed the three on three tournament for the last 100 years, but there is something that I have been doing every year since I was 10.

So after a sore, but positive, wake boarding experience a couple of weeks ago I decided to do something while my wife was away at work. I made a plan to go on a stealth barefoot waterski run with the boys. I was surprised how stable my hip was at 50 mph.  Was it smart.  Nope.  But
who cares, I had to keep the tradition going.  So  for all those out there that someone says you can’t do cool stuff  after a hip replacement, I disagree.  Video down below. Still waiting to run, but I try anything else.  Can’t wait for snowboard season.

And HERE is the video of Jeremy Barefoot Skiing.  Can you say……B-O-O-M?

I also heard from Ira who is just a few weeks out from his hip replacement.  He’s continuing to run….because that-is-what-runners-do…..Here is what Ira had to say:

Glad to see your hammie is better and you’re up and running.   So you’re at about 90% after 9+ months post surgery.  Sounds good.

My hip date is 26 days away.  I’m getting nervous about the
unknown.  However, your blog and other research have helped.  I’m still running, albeit slowly.  My knees are bothering me.   Not sure if it’s related to the different running form due the my sore hip but I only have a handful of days left to go.  I did 5.5 miles at serious penguin speed on Saturday and I have a 5k planned for Sunday.

Ira “gets” it.  The impending hip replacement is just a “blip” on the radar screen of life.  He will be out of running during recovery for a little while, but with his attitude, it is clear that running will continue to be a part of his fitness regimen for years to come.