Had a pretty fantastic run today. Felt good, beautiful sunny run on a dike trail along the Columbia River. 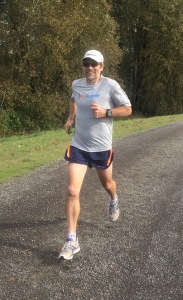 It has been well over a year since my last post. That is because running just was not feeling right. I didn’t have hip pain while running but after it had a kind of deep ache. So that just left me in almost in a depressed state and didn’t want to post any negativity. I talked with Brother Tom months ago and he had nothing but positive responses to my concerns. And motivated me by his advise. That his hip had good days and not so good days, but after about 1.5 years a noticeable better feeling was attained. Well running has gotten better for me during and after now. Still not running very often but I don’t get that de ep ache anymore. I ran a 5k a few months ago on a trail with some hills and pushed hopeing to break 7:00 miles. Only got chicked by one girl who wasn’t hardly breathing and won the men’s division at get this 6:5 pace.

Long term goals are still to continue cycling for fitness and run when I feel like it. Also thinking that a Bloomsday is probably in order for May 2016. 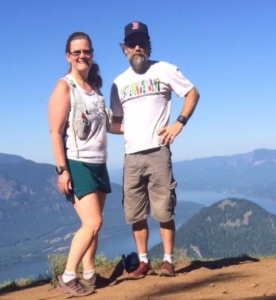 It has been a long while since I posted. That is because I have been trying to not run. I have never been patient about running in the past but this time I will be. Because my Dr. said I should never run again and that support system is not there, I am waiting for 12 weeks post-op because that is the amount of time Brother Tom’s Dr. advised.
Over the last couple months I have returned to doing all life activities except running. Cycling has become my main source exercise and have increased my mileage to 32 mile ride. Been climbing some mega hills on the mt. bike on those rides. I must say that it feels really good to put out some effort. I can finally say that I’m not I the worst shape of my life because that was 2-3 months ago.
I have been hiking trails also. And have even shed the hiking poles. I need to be ready for a trip soon to the Grand Canyon. Want to hike Rim to River and back. I’m more worried about the heat than the hip!
The hip is still numb, and it takes 10 steps or so after sitting a while or laying down to feel better. Flexibility has gotten better and I can even cut my own toenails now. But range of motion is no better than it was before surgery. I really need to work on that.
So July 23rd is 12 weeks and I intend on running at our running clubs Wed. night track workout. Thought I would start with running straights and walking curves for 1 mile. I’ll post with some positive thoughts after!
My long term goal is to still be able to run 5K to 5 miles whenever I want, but I also intend on maintaining my fitness mostly with cycling to prolong the prothetics life.
I have added a picture of my wife and I on top of Dog Mt. 2900′ 7 mile hike I did recently. I decided 3 months ago that I would not shave until I could … (Click Here to View Full Post and Comments)

Week 4 Post-Op
Probably the biggest event for me since my 2 week update is that I returned to work full time on day 19. Walking on just my own two feet. My job requires me to stand and walk pretty constant. So on my breaks I sit and relax.
On days that I work I try not to do as much exercise on my own time. But have increased my long walk now to 3 miles. And stationary bike to 11 miles.
Still take advantage of the LaZeBoy and ice after the long days. Sleeping seems to be getting better. Even rolled over on surgery side. Incision wasn’t very comfortable though.
For a while my surgery side felt taller then other side but don’t notice that now. Before surgery my whole surgery side was slouching so bad. I had knee pain on opposite side also I think from all the limping. But that had gone away post op. Feel it again sometimes. Hmm! I’m still having to use my sockaid and have someone tie surgery side shoe. Was hopeing to be able to reach it by now.
Get to see Doc in another week! Looking forward to more restriction being lifted.
Let me just say that I’m thrilled with my progress but that we all should not compare each other’s recoveries. I have been very fit my whole life and was still in pretty good shape heading into surgery.… (Click Here to View Full Post and Comments)

2 weeks post op.
Been driving since day 9 post op. What a relief to not be so tied down. Off pain meds since about day 6 with the exception of an occasional Tylenol. Using aspirin for a blood thinner 2 x day. TED socks supposed to use for 4 weeks. Sleeping has been better as I have been rolling over on non surgical side with pillow between knees. I have slowly worked up to walking 2 miles at a time. Using trekking poles that I like when I backpack for last 3-4 days. I feel steady enough. Also got the approval to ride stationary bike. It is a old model upright. No resistance just spinning. Each time increasing rpm though. Up to 5 miles at 50-60 rpm. Feels good to move so. Going to keep increasing slowly on both bike and walk!
I have been trying to eat lots of protein in the form of meat. I love my vege’s to. I do take multi vitamins and wonder if other supplements could be beneficial to bone health. B6? Calcium? Hmmm!
Started working again on day 12 for 2 hours, day 14 for 4 hours. Feels ok but standing on concrete that long is a bit tiring still. I’ll walk shorter on days I work. Nice to not blow all my paid time off though. I have had a vacation planned since way before I even thought about having THR. Looking forward to August. Should be pretty healed by then to.
April 30th seems a long time ago now. I’ll never forget that day though!… (Click Here to View Full Post and Comments) 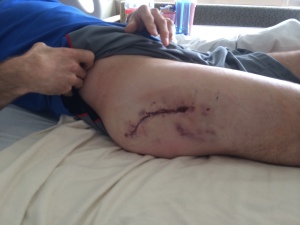 It has been 1 week since I had a “Posterior Total Hip Replacement”. Doctor
choose to use Titanium metal femur spike and cup along with ceramic ball and
ceramic cup liner. The worst part of this whole ordeal was checking in before
surgery and all that happens leading up to surgery. I felt that I could bolt
like Usain Bolt at any given moment. And it really sucked to be leaving the prep
area being wheeled down the hall without my loving wife beside me. After just a
few short minutes upon arriving in surgery room I remembered nothing and awoke in recovery asking for my wife. Once I was alert enough I was moved to my hospital room. I was given lunch of which I devoured like I had just finished a 50k. Got to be with the family now which put me at ease. PT came to work with me and taught me the exercises I should be doing daily. They seemed pretty darn easy! And I got up and walked down the hall and back. I was amazed that I could put total weight on my new hip. Pain was not really ever to big an issue as I was first medicated through IV and then orally with Oxy. and then Tylenol was added. After about 4 days I started cutting way back on the narcotic (Oxy) and depended entirely on Tylenol by day 6.
Day 4 was a bit miserable due to constipation and painful heels from sleeping in bed. That was fixed by using stool softener and propping up lower legs slightly so the heels were not resting directly on bed. I really don’t like the TED socks that I was told I should wear for 6 weeks. We’ll see about that.
So walking is good for hips huh? Day 4 went to the track with my wife and walked 1/2 mile with crutches. I felt like I could have gone much further. Day 5 another walk with mom = .6 mile. Day 6 I walked 1 mile. Still feel fine! Optimistic for Doctors appointment … (Click Here to View Full Post and Comments)

Just had my Pre-Op Dr. appointment. 5 days till surgery date. I have been
dreading all this surgery stuff. But what are you going to do? Hip won’t get any
better without surgery! I was a bit bothered in that I didn’t even have appointment with my Doctor, but instead with his PA. I really needed to hear the words from the Surgeon. I expressed that running has been a huge part of my life for as long as I can remember and wanted to build back my fitness post surgery by cycling but still wanted to be able to run 5k’s occasionally. PA’s response of course was “we don’t believe you should ever run on a prosthetic hip. That it will just not last! And that if a revision is needed later the surgery is
harder”.
I’m supposed to be getting ceramic/ceramic and I was curious if maybe I should be getting ceramic/plastic because of my goals.
I left the appointment wondering if 1) I have the right doctor, 2) If I still even want to go through this! Guess I have some real soul searching to do!… (Click Here to View Full Post and Comments) 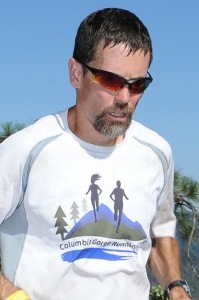 Hello I’m Stan and I have a hip problem.

I started running in High School and Bloomsday 12K that same year of 1980. Right away I loved it probably because it was the first activity I found that I was fairly competitive at. I was fortunate enough in those first years to make great friends but mostly to have had a coach that instilled in me that running is a lifelong endeavor. Thanks Vern! He is still one of the most enthusiastic persons that I know. After some successful years in High School and College I turned to road racing. I raced all distances but really enjoyed the long run. The Marathon became my top choice and I put all my efforts into making it to the Olympic Marathon Trials. Yes along with my great friend and training partner (Chris) we realized that dream for real. A couple years later I tore cartilage in my knee on a long run and had surgery to fix that so I started running slower and longer on trail Ultra’s for less pounding.  Then still 2 more knee surgeries. All the while running farther and farther. I have finished eight of the nine 100 milers that I have entered. The last one I probably shouldn’t have started and dropped at 100K because my hip was hurting a lot. That was two years ago. Recently I finally saw a Dr. and then another one for another opinion. Same problem… I have osteoarthritis in the hip along with bone spurs that are helping to limit my range of motion. I am struggling to just put my sock and shoes on. Running is not fun anymore because it just hurts to much. So I have decided to get the Total Hip Replacement Surgery and hopefully enjoy running again or at least get myself fit again. My goal is to cycle for fitness so that I could still run some short Fun Runs/Races.

April 30th, 2014 I will have that surgery and start the long road back.… (Click Here to View Full Post and Comments)