Hello, Hiprunners!  I am a 64 year old avid runner.  I had a single metal on metal Birmingham hip installed 6 years ago.  It was super successful, I thought.  Since then, I have continued to run competitively, and enjoyed many other endurance sports, as I have for 50 years.  Since the hip surgery, I have completed the Grand Slam of Ultrarunning, and set age group course records at about a dozen ultras.  My BQ is sub 30 minutes.  I enjoy the ride, and have been blessed with not having to train that much, for real.  I have run about 8000 miles on this hip.

But, this hip has been hurting increasing the last couple of years.  I cut out all good training about a year ago, and now can hardly run.  I limp when I stand and walk….argghhh! Even golf and bowling are nearly impossible!

7 months ago, I had repairs to my medius gluteus, and medius minimus.   That did not help.  I feel that repair is fine, but has no impact on the long term.  MRI for that repair is apparently ok.

The surgeons feel the metal on metal hip is in good as new shape, not loose, not worn.  x rays and MRI agree, they say.  Metal levels in my blood are ok.

Something is wrong, really wrong.  Limping and pain are increasing, and have been for several months.

Any one out there have had a similar journey and resolution???… (Click Here to View Full Post and Comments)

Although I have not posted for several years, I have been active and enjoying my left hip, a Birmingham Hip Resurface, done in 2015, at age 58, 8000 miles ago.  Hiprunner.com was an inspiration when I was 58, and needing a hip, and you were there, THANKS!  That was a blessing, I only missed a few months of playing, and returned almost 100% since then, until now.  I Grand Slammed (I think the only one with a hip to ever do that, and within a year of the surgery);  Since then, I have run about 30 ultras including some hundos, all of my marathons have been BQs, I have played at inline skate marathoning (89 minutes), raced cross country ski ultras, alpine climbing and cycling are going great, play volleyball and run too many beer miles, hung with my running clan as  President of my running club.  There has been lots of living large, I am thankful for the time, resources, and most importantly, my health.

That said, I kindly could use the counsel and the wisdom of this great group again.  I am having big problems in recent weeks, with my metal on metal Birmingham, even though my mileage is way off, and there has been no long runs and certainly no ultras for me for the first time in years….. After running at any pace for 3-5 miles, there is pain, dull pain. Seems to be near the joint. Enough pain creeps in until I have to pull up. Walking helps a little, but stopping is the quicker answer. I can very soon, in a minute or so, start running again, like nothing happened but it returns sooner than before, much sooner. Next day, it is like starting over. Xray is good. Volleyball, biking, sleeping, are all pretty good. Just a problem with distance … (Click Here to View Full Post and Comments) 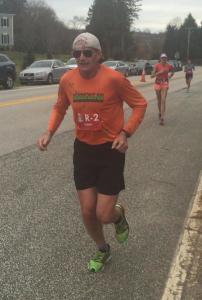 It is fabulous getting out there!  A little ahead of script, but just plain wanted to do it, thanks to encouragement here (hiprunners!) and there.  Sometimes there is no substitute for the joy of running.  It was easy, I hope you all have as much pleasure.

25 minute Turkey Trot 5k, and 2 days later 2:04 half marathon.  Walked a little every mile for good vibes, both days, no worries.  Lots of weaker soft tissues, but the bones and fake bones feel great.  I am getting bullish, I think this thing might really work ok!  But I am going to be a good patient, keep staying off the running generally, nothing more than trotting until 20 weeks, maybe be the real deal in 40-50 weeks?

Greetings, oh Hiprunners!   I am day 33!  58 years old, and had a resurfacing, first hip, first time.  It has been about 2 great weeks now that I have had no limp, no cane, no meds.  I have been doing very light trekking, and have hopped on the exercise bike for a light, slow spin.   I even walked and trotted a 5k in 35 minutes with my dog this weekend.   Only one thing seems to be a concern.  I have a painless, almost indiscernible, light “clunk”.  Only when standing upright, or reaching back or for the stars- I make that extra movement, I feel a very light clunk, no noise.  I think it is the new hip, or a ligament, I can’t tell for sure.  I am betting on the hip is not perfectly staying in socket or not at some motion.  I don’t think it clunks under walking or trotting, maybe just standing when changing weight on my legs.

Greetings, All!  I am happy to find you!  I am 58, 6 ft, and am fortunate to be in extremely good health, except for one d…. hip!  I have much athletic background for 50 years, I have been very, very blessed and fortunate in that.  80 ultra runs, grand slam of 100 mile runs, a bevvy of sub 3 hour marathons over 4 decades,…80,000 miles of that…. I like racing.  But I have a bone on bone hip that has put me on the shelf; osteoarthritis, of course.  Ouch!  My question boils down to FHR vs resurfacing?  What is the best opportunity for getting back to the great running game, and lasting for the rest of the running game in this career,  10 years or so?… (Click Here to View Full Post and Comments)