Has anyone else been diagnosed with an autoimmune disease such as SLE (lupus) or RA (rheumatoid arthritis) etc over the months/years since hip replacement?  I was diagnosed 4 years after surgery and I’m pretty sure it’s unrelated however I was 50 when diagnosed which is a little atypical so I wanted to see if the group has had any similar experiences.  Or worsening of the autoimmune disease?   Not putting it out there for anyone to have second thoughts about having surgery.  I’m treated for my disorder and running like before, so it’s not an issue but I’ve been meaning to put the question out there to the group.

If anyone is interested, here is a link for the Zero Runner. I saw the ad in Runner’s World, tried it and bought it. It’s not cheap for sure, but it’s the only machine I’ve ever cross trained on that actually feels like running. Zero impact but with weight-bearing and good glute work. I think it’s improved my form too. I have had it since May 2015. Nice to run and feel fatigued but absolutely no pain. I used it at the end of my Buffalo Marathon training and will incorporate it fully into my next one. I wonder if it can take the place of many of the outdoor/impact runs (at minimum replace the “junk miles”)? So far I’ve been able to transition to road and trail without any drop off of in fitness, probably because it’s a running movement and is weight-bearing as well. I highly recommend checking it out.

Even at 2 1/2 years, I still find that I’m continuing to improve with respect to flexibility and performance, which I really was not expecting this far out.  Each run still feels like a gift.

I had a follow up visit with my surgeon recently and everything looks good. I scheduled it because I had been gradually increasing my mileage and wanted to make sure that I wasn’t screwing things up. The x-rays looked good and he said repeat in 5 years! He said that the maximum benefit for all practical purposes is at ~ 24 months, and I have to say that I think it’s about right. I have noticed plateaus and then progress over the past 20 months, but overall it’s been a steady improvement. I’m not in the category with some who are running full speed at 12 weeks, but fortunate to be somewhere in the middle with respect to recovery. I ran a 10 miler 6 weeks ago and it was 10 minutes faster than last year! Even more gratifying than that was running the 119th Annual Turkey Trot in Buffalo NY with my 16 year old daughter (and 13,000 others!). It’s actually older than the Boston Marathon. We had an awesome time; her first race of that size and distance (8K). The costumes were pretty incredible, including one guy dressed in Captain America underwear (briefs), running shoes and a Buffalo Bills hat. His running partners were dressed like Teletubbies. I have no explanation. Did I mention it was 28 degrees?

Merry Christmas to all and Happy New Year!! I hope we all achieve our goals in 2015!… (Click Here to View Full Post and Comments)

Things are better after hitting a plateau at about 11-12 months. I continued to have post run hip flexor pain (worse when I tried to run a little faster) as well as some IT pain with increased mileage and was getting discouraged. I emailed Tom and he reassured me that he started to feel more like his old self at 12-14 months, which interestingly happened to me too. I redoubled my core exercises at that time and it seemed to help quite a bit. Dave posted earlier about a book “Anatomy for Runners” which I picked up, and I highly recommend it as a part of recovering from THR (it explains a lot about why we get injured, and how to prevent recurrence). Currently I am running about 5 miles three times per week and 10 on Sunday, some weeks a little more and some weeks a little less. The weather has been hot and humid here in NC so it gives me an excuse to stay on the treadmill which keeps impact down, and I can watch streamed video on my tablet as I run (hooked on Ken Burns documentaries). My advice to the newer hiprunners is to do more core work than you ever did before, stretch and roll, and don’t get discouraged by plateaus. Just when you think it’s not going to get any better, it seems to do just that. I can’t explain it, but that’s what has happened to me over the past 15 months. … (Click Here to View Full Post and Comments)

It’s been quite awhile since I last posted, and although I am not diligent about blogging, I’ve been keeping up with everyone else’s posts. It’s comforting to read about the similar experiences of others, and to read up on what may be coming from those who have had surgery before I did.

Things have been going well. As I noted before, I resumed running four months after my surgery (now a little over four months ago). I have gotten up to about 20 miles per week, running 3-4 times per week. I still feel a little ache now and then, but each month I look back and it’s less and less. I have done a couple of 5K’s, an 8K, and even a 10 miler. I am a little bit slower than I used to be, but after a year lay off, and 10 extra pounds, it’s expected. I got into ultras toward the end of my pre-hip running days because I liked the more relaxed pace and camaraderie of ultras so running a little slower is fine with me. Today I did a 10 miler with one of my ultra buddies that included plenty of hills and a wet meadow run with some single track. We were soaked and muddy, but what a blast!!

We have a shirt run coming up in our area called “The Fellowship of the Idiots.” I don’t know if shirt runs are common elsewhere, but this is where you sign up and finish a loosely organized (free) run, and become a member of this informal running club, getting a t-shirt commemorating it. It sounds silly, but it’s a so much fun. A bunch of us from my running group are entered for this, running up Morrow Mountain in Albemarle, NC, and then back down (19.7 total miles). The originator of this shirt run years ago told his wife that he was going to do this at 5:30AM on a Saturday, to which his wife replied, “You’re an idiot.” and that’s how the group, and the run got it’s name. I got my shirt 2 … (Click Here to View Full Post and Comments)

I had my follow up appointment last week.  My x-ray showed good bone growth into the prosthetic, no fracture and no evidence of loosening.  What a relief! 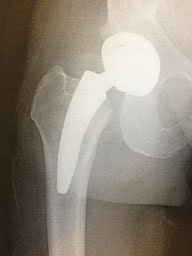 My orthopedic surgeon told me to come back in 20 months for a routine re-check.  I didn’t ask about running, mainly because we discussed it before and he gave me the party-line answer of recommending non-impact activities.  I told a couple of my running friends later that day about my positive results and of course the first question was, “Did you run yet?”  I had thought about this day for over four months now, and I was surprised that when the day finally arrived I was hesitant about it.  I had my running shoes picked out, was mentally practicing my chi running, and was literally even dreaming about it; but now that the day was here I wasn’t ready to go for a test drive.

Finally one night I took my daughter to soccer practice and decided to walk around the park to pass the time. Walk turned to brisk walk, to race walk and then….to an easy run.  I was running for the first time in a year!  I had no Garmin and no expectations.  Interestingly, I was surprised that I was so out of breath.  I had been cross training for the whole time.  Maybe there is no real cross-training surrogate for the activity you are doing?  Or maybe it was because every muscle in my body was tense trying to protect my hip?!  I walked a bit, and ran some more.  I repeated it once more and stopped.  I won’t lie.  A couple of miles felt as good as finishing 50.

I was surprisingly sore the next day and went pool running with my daughter who swam in the lane next to me.  The following day I walked a mile and a half with my wife, then ran two miles, and then walked the 1.5 miles back home.  My wife said that my stride looked good (midfoot), and the odd external rotation of my right leg due to osteoarthritis was … (Click Here to View Full Post and Comments)

Hi everyone!  I just joined the group.  I was searching for “running shoes after hip replacement” and hiprunner.com came up.  This is just what I’ve been looking for!  I am 46 (almost 47) and am a recreational runner from Davidson, NC.  My story is a lot like the others that I have read.  I thought that I had a strained hip flexor and continued to run (and ice).  The pain continued to worsen and initially I was diagnosed with femoral-acetabular impingement syndrome.    This didn’t respond to rest, naproxen, PT or even intra-articular injections. In April 2012, my limp never went away.  In fact, it kept getting worse.  I got a second opinion in the fall and that’s when the hammer came down.  I had osteoarthritis in my right hip so bad that the only solution was hip replacement.  I was surprised at how quickly the joint went bad, but the orthopedic surgeon said that it wasn’t unusual (I have hip dysplasia and didn’t know it).  After a third opinion and feeling bad for awhile, I explored hip resurfacing which took me to the orthopedic surgeon who understood what my goals were.  While he wouldn’t come out and say that it was OK to run, he chose the prosthetic type and approach that he felt would be best.  I had surgery April 26, 2013, anterior approach, ceramic prosthetic, short stem to preserve bone.  I pre-habbed with the elliptical and pool running prior to surgery, and continued post-op once I was cleared after 4 weeks.  I have a follow up x-ray September 5th and if it looks good, I plan to test it out (after finishing Alistair’s book of course).  For now, I am trying to get that last 10 lbs off, working on core exercises and weight training.  I have to say that I feel about 90% normal (which is good because I haven’t been 90% since 2010!).   My oldest daughter  started running on her high school cross country team, so it’s killing me not to join her on training runs.  At least I was able to introduce her to the … (Click Here to View Full Post and Comments)